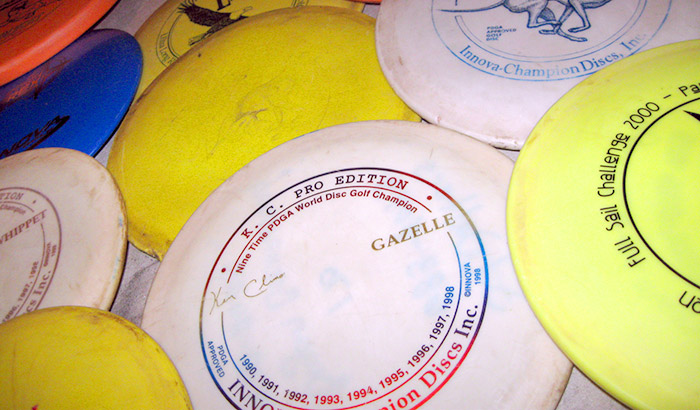 As an avid disc golfer, I am always fascinated when I see a disc golf discs take flight or fly to its destination after a player throws it on the playing field. It is comparable to a bird flying in the sky and trying to reach his next destination. But unlike the bird, the disc golf disc design was made to complement the skills of a player and the quality of his throws to reach his target. This realization has brought me an interest in knowing how disc golf discs are made in terms of knowing the details of the process.

With the increasing numbers of disc golf enthusiasts playing this beautiful sport, it’s cool to think that there are a lot of disc golf discs available all over the world. I would say that the numbers can easily reach a million and it is continuing to increase by the day with more disc golf manufacturers making it every day. There is no surprise that there are a lot of companies that have emerged over the years. It’s like an industry within an industry and it’s good for the sport, right?

But how this sports equipment are made in a disc golf disc manufacturer’s setting? Is this the same with how frisbees are made? Can you make your own disc golf disc? These questions and other related information will be discussed throughout this article to provide disc golfers a unique knowledge of the sport that they love.

The Materials Needed to Make a Disc Golf Disc

In the early days of disc golf discs making, there were a lot of materials that were used. But now, in the modern era of the sport, a disc is usually made out of a certain type of plastic called polypropene.

There are also other materials that are being used to make disc golf discs including polyethylene, thermoplastic elastomer (TPE), and polyurethane plastics. Other manufacturers may have other disc golf material but thermoplastic resins are the most prominent in the industry due to the different benefits it offers.

For one, this type of plastic has a special reshaping ability, stability, and high-impact resistance. Furthermore, another factor that makes thermoplastic resin perfect for disc making is it’s harmless to the environment because it’s recyclable and does not emit a bad odor and other toxic smells in the manufacturing process. 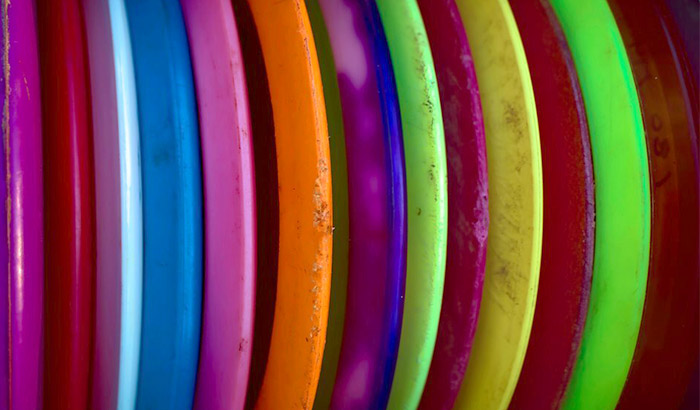 Since we already know the materials used in the making process of a disc, it is now time to familiarize the exact process which is injection molding. To make you fully understand the process, I will make it as simple as possible to the readers.

When a plastic will be subjected to injection molding, it will form different chemical bonds called polymers. These different bonds involve different types of molecules which form a chain that determines the quality of the plastic after the molding process.

These plastics when heated by molding machines make the molecule weaker and turns the plastic into a liquid. This liquid can now be put in a molding tool which has the disc golf molds where it will cool down to make the polymer chain solidify again. The result is the plastic formed into a disc gold discs.

But before the actual process, it is important to note that the manufacturer first needs to come up and design a disc mold. This is where the different plastic materials are inserted to form a disc golf discs.

The preparation of materials is being done in the initial step. The compounding process will convert all the raw materials into pellets-looking plastic that will be used in the actual injection molding process. I will not elaborate on how the actual process looks like but it is usually done in the manufacturing area.

The next step is to measure the right amount of plastics and is done by the manufacturing worker. The worker will now feed the materials into the injection molding machine. In order to keep a consistent result, the blend is being processed by a 75 degrees cylinder for about 3 hours. This is done to increase the quality of the result or else there will be a lot of imperfections and impurities in the discs such as cracks among other things.

After the previous process, the next step is the color blend wherein the desired colors will be incorporated into the plastic. There will be one or two containers being used on the machine depending on the design to get the colored effect of the plastic. The plastic and the colored blend will now be put in the injection cylinder where it will be heated up to 220 degrees to form the disc.

In the injection cylinder, the pressure will be matched according to the specific molds and plastic used. This is where the amount of force will be to determine how much will be used to completely fill each mold without spilling.

Fourth step
When the pressure is reached, the molds will now be cooled off and will be removed from the machine. The disc will then be put on a ventilated surface for about 10 minutes. This is the time where the plastics will now contract and will get its disc golf discs shapes. The excess plastics, meanwhile, will be removed from the surface of the disc to get the most consistent shape and flight.

After that, the disc will now be put on a scale where it will be measured to determine if the weight is within the approved weight limit set by the authorities. The weight measurement will now be printed under the disc.

The next step is quality control wherein each disc will be inspected by the careful eyes of workers employed by the manufacturing company. All discs that fail to pass the quality set by the company will be separated from the good ones.

The final step is the graphics where the stamps will be printed on the surface of the disc. This is where you normally see a 3D printed disc golf right before your eyes. In this process, the matching stamp will be put to the top side of the stamping machine and the disc put in the center, and a foil is pressed down for about 0.8 seconds with the 135 degrees plate on top so that the stamp will stick into the disc.

After the disc is made, it will now be packaged and send to the sellers and retailers of the discs. The process of disc making is actually complicated compared to the steps I mentioned. I just want to show all the readers a summarized step-by-step guide on how the disc is made on a much simpler guide.

The sport of frisbee and disc golf will always be related to each other. The fact that there are some sports enthusiasts that often mistaken that discs from disc golf and frisbee are exactly the same makes the two sports share similar properties. However, a disc used in frisbee and those of disc golf only share the same look but there are also some differences in terms of the manufacturing process.

The disc golf disc which is designed to take flight and cover longer distances has a more complicated procedure in terms of manufacturing than how are frisbees made. With disc golf, the manufacturer needs to determined what type of discs they are making, whether its for putter, midrange, or for distance drivers. They need to satisfy the need and requirements of this disc and be able to meet the demands of the players. Therefore, manufacturing disc golf discs is more complicated compared to the other disc found in our home.