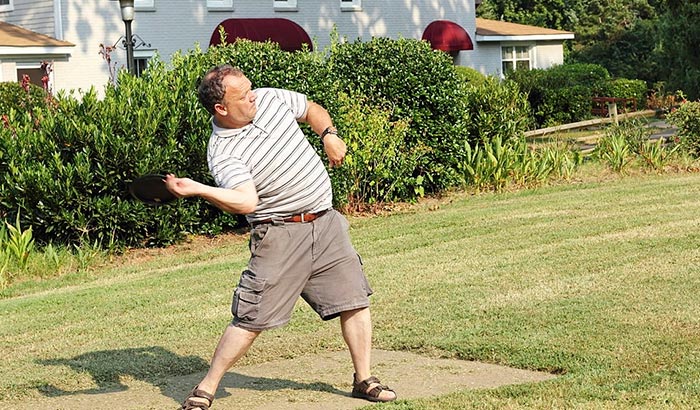 Apart from the backhand, throwing the disc with the forehand is also one of the most popular throwing techniques in disc golf. There will be moments in the sport where a player will be dealing with obstacles such as trees, among others. In this situation, changing the angle or the disc’s flight direction is the best solution. And this is where the forehand throw comes in as the best weapon during the game.

The key to learning the throw is to dedicate your time to do it. I know that many disc golfers usually prefer the backhand, but understanding this throwing technique will come a long way if you want to bring your disc golf skills to another level. Besides, there is a significant upside if you can learn both throwing techniques because both can be used depending on the game situation that you are into.

However, learning how to throw a disc golf forehand is never easy. Many players have been vocal about the difficulty and frustration they endure while learning this throwing technique. But the importance and the benefits of developing a reliable forehand always outweigh the problem of learning it.

And to help interested players who are looking to add this technique to their skillsets, we have compiled several tips on how to throw a disc golf forehand the right way.

How Do You Throw the Forehand?

Honestly, there are several variations in this throwing technique, but many players have used the method we will show. Please check below on our breakdown on how to do a proper forehand throw.

There are a lot of several ways to grip a disc in disc golf. And this is the same with throwing forehand, where other players use a different type of grips. I know three popular grips used by professional players: the stacked grip, forehand power grip, and forehand fan grip. I will not discuss each of the grips in detail, but the point is, every player must have their preferred grip when throwing forehand.

Whatever your preferred grip is, you need to be comfortable with it when throwing the disc. You cannot just copy a type used by famous pro disc golfers and expect the same result. Learn how to find the grip that suits your hand and offers a lot of comfort. From there, learn the correct way to do it and start practicing on the field.

The Proper Reach Back

If learning how to throw a disc golf backhand needs you to familiarize the proper reach back, this is the same when throwing a forehand, albeit in a different technique. The backhand’s reach back is more of a straight line, while the forehand can be comparable to a baseball throw, golf swing, and other similar movements.

If you are a beginner, starting it low is good while adjusting the height once your skill progresses. Throwing it low will let you flick the disc quickly, making the wrist active while getting a smooth and fast release. Once your wrist is well trained, you can now afford to reach back farther when throwing forehand. You need to bent over when throwing the forehand, while the elbow should be parallel to the hips to generate more power.

Moreover, the hips should be sideways to the direction of where you are going to throw. The foot movement should start with the right foot forward, then turn the left foot forward at a 90-degree angle. Then use the right foot to push the other foot move forward for them to trade places. After that, you are already in a position to throw the disc using the forehand.

As you start bringing the disc across your body, let the weight of your back leg transfer to your front leg. Then start to explode your hips, facing forward in the direction of your throw. After that, snap release the disc while taking a step forward and letting your arm come across your body.

Tips to Improve Your Forehand Throw

Having a good forehand throw will need you to have the following factors: balance, control, speed, power, and follow-through. All of these factors are required if you want a good result of your forehand throw. But to be able to do that, please follow the tips below:

Many disc golfers see a lot of disc flutter or wobble when throwing forehand, but this can be easily corrected. By learning how to grip firmly and make sure that there is no loose or bad connection between the disc, it will have more spin and station to increase its stability during the flight. 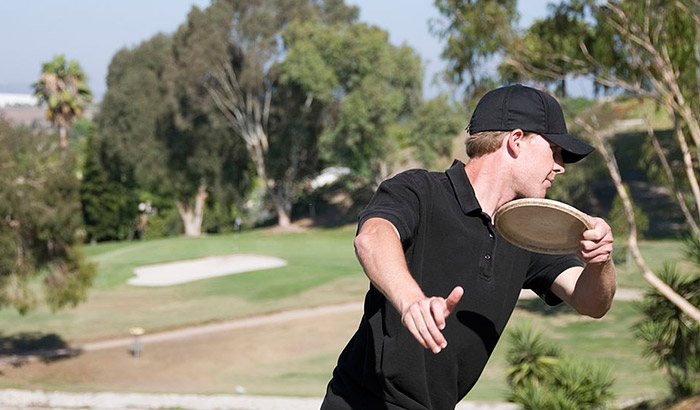 In terms of superiority, I can say that there is no superiority between the two regarding its importance. Some players find using the forehand easier compared to the backhand and vice versa. I know many players who find the forehand more challenging when it comes to the overall form.

Many of you believe that throwing a backhand will give anyone more distance; I still think that familiarizing both throwing techniques will provide upsides to the players. There will be times that the forehand will be the primary option compared to the backhand. It will all depend on the situation on the field. Knowing when to use each technique will come a long way in developing your decision-making during the game.

One thing is sure, though, that if you are presented with a hole without obstacles in the fairway, the backhand is your go-to throwing technique. Lastly, regardless of the throw you are using, having the right disc in your hand will come a long way in making the throw successful and produced the desired result.

Learning how to throw a disc golf forehand is essential as learning the backhand. Yes, the backhand throw is a lot more popular, and many disc golfers use it as their preferred shots. But if you are just starting the sport, I would suggest also learn the correct technique in doing forehand throw. I tell you, this throw is also helpful on shots where there are a lot of obstacles on the field, and the need to change the angle of your shots is needed.

There are different factors and technique that contributes to doing a successful forehand throw. From the form to the reach back, the proper grip, choosing the correct disc, and other factors need to be familiarized when learning the forehand throw.

It is not easy to understand this throw, as proven by many disc golfers that I know. But if you have the determination and constantly spend on the course consistently, you will develop your forehand throw at the soonest possible time. And I will bet you on that.